I have been waiting for the day that I could load up and go barrel racing pretty much since my last run in August 2012. After having my son in March, I knew that although I still had some time before I would get to go run, that it was within my grasp.  I made a goal to run at a local series which would be great for both Elvis and I on way back into the arena.  I couldn't wait!

However, when the time came, I tried to back out and make excuses not to go.  You see, I'm a perfectionist and sure don't want anyone to see me not at the top of my game.  After having the baby, I am struggling getting those last pounds gone. Because of this my balance is way off, my timing is off and my confidence is low because of lack of balance.  For the past couple of weeks, I had been practicing the barrels and with each day of riding I felt better and better. When the time came for the barrel race though, I still was way out of my comfort zone.

I did my best to come up with legit excuses not to go.  For instance, poor Elvis had been bred every day that week except for Tuesday.  I hadn't gotten to ride him much that week with his breeding schedule and with my already low confidence in myself, not being able to practice made it even worse.  My husband reassured me that things would be okay.  "Elvis is in good shape and with the barrels, he knows his job," he told me.  He had a point.  My fears weren't really about Elvis, but about myself and there was only one way to conquer those fears and that was to go to the barrel race.

We loaded up the whole family and away we went. I was able to exhibition a few times before the barrel race to show Elvis the arena and get a feel for the ground.  I wasn't too worried about Elvis in those aspects so that was really just an excuse to get exhibitions for myself.  Since our last run in August, I was trying to "tweek" a few things that I felt would make us quicker.  It really wasn't Elvis, again it was myself that I was working on.  In the exhibitions, I was pretty pleased with myself in how I rode.  Still far from perfect but I was riding Elvis to the points that I wanted to and he just felt good.  That sure helped my nerves and gave me a little more confidence for when we were to run.

When it came down to my run, I tried my best to ride him like my exhibitions.  However, with the added speed my already lack of balance showed up and I felt like a rag doll on the back of a very powerful horse!  I held on for dear life, fearing the worst of falling off.  Poor Elvis was pretty much on auto pilot as I put all my thought into keeping myself in the saddle.  In turn I didn't ride him like I had practiced.  At the end of the run with me still having a death grip on my saddle horn, I was disappointed with myself.  I hadn't done Elvis justice and felt like I had let him down.

I was sure happy with how Elvis handled himself that day.  At times I'm sure he was thinking, "Work with me here woman!", but he did his part despite me not doing mine.  At the end of the day when people asked how my run went, I simply told them the two goals I had set for myself that day - first, I stayed on and second, I kept all the barrels up.

Sometimes we put too much pressure on ourselves that we need to take baby steps. I didn't expect to go win the jackpot that day.  However, I had hoped that I would have rode better than I did.   As we were driving home I kept reflecting back on my run.  Thinking of the things I did but most of all didn't do.  I had ran a few times at home and things had felt better (on my part) than they did that day.   I felt pretty down about it until I realized that I needed that run under my belt to use as a stepping stone.  I learned more from that one run at a jackpot about what I needed to do, how to ride, and my mentality than I had the whole last three weeks of working barrels at home.

Although, that video won't be made public any time soon, I've watched it over and over, seeing where I lost time, what I did right, and what I did wrong. Had I not taken the "plunge" and stayed home I would have missed the opportunity to learn and use that for my next run.  If I wait until everything is "perfect" before I go out and run, I will never get the chance to really go on and do something.  By going to the barrel race, it will act as a catalyst for us to improve for the next barrel race.  It gives us something to base our progress on and as the summer goes on, we will be able to see how far we have come.

Even though I felt like whiplash the monkey on the back of Elvis, sometimes those times of putting yourself out there before you're perfect are worth it.  I know because of this, my time getting my confidence and balance back in the saddle will be that much shorter because of the experience I gained.

Why Do We Stand A Stallion?

We're starting to get some beautiful weather here the last week or two.  Thank goodness because Philip and I have been running around like crazy.  We're really getting deep into the breeding season and so collecting Elvis and breeding three mares or more every other night is part of our every day life now a days.  Not to mention the checking to see if mares are coming into heat, going out of heat, how close are they to foal (we still have two left), and soon it'll be time to ultrasound to see if our hard work has paid off with a tiny little embryo.  Once I see that embryo on that ultrasound screen I start to breath easier.

There was a post on BarrelHorseWorld.com about why do you stand a stallion.  I thought that this was a pretty good topic.  I've talked about how we came to have a stallion earlier in my post "Dreams Coming True - Part 1", but why do we keep doing this? It is so much easier to let someone else stand a stallion and breed your mare or even buying the colts already on the ground.  However, it seems like there are many out there that dream of owning a stallion and everything will be butterflies and rainbows.  Let me tell you, that wasn't quite the "dream" we had at first. They are work!  Even with the best mannered stallion, they are work!  Not just physical work with making a facility safe for them, doing everything you do to train, manner, and breed them, but also emotional stress can take it's toll. You constantly have to be on your toes with a stallion, even with the most docile.  They are creatures of habit and need a handler and trainer that will always keep them correct and they know they are to obey and have respect.  You have to be aware of your surroundings constantly.  Parking at the jackpots and rodeos aren't just a matter of a good spot closest to the water, but also who are your parking neighbors and if they have mares, will they be respectful and keep their distance from your stud?  It is tiring, no doubt physically and emotionally.

No matter how much work, there are rewards.  Elvis is the type of horse that I enjoy to ride and with that we have a connection that I haven't felt with another horse.  He's smart and always wants to please.  Running barrels, working cows, giving our kids rides, he does it all and enjoys doing those things.  With riding many different horses, I have found that there are just some that I dread to ride every day.  With Elvis, there is not that feeling of dread.  I have enjoyed riding and training that horse every day I get the opportunity to throw my leg over the saddle. Am I biased? Maybe, but it wouldn't matter who owned this horse for me to feel this way.  It is this along with his other attributes of good legs, feet, solid conformation, trainability and athleticism that makes me keep a stallion.  With Elvis I have the opportunity to produce colts like their sire, that every day I enjoy to go ride and work with them.  They make things fun and easy.  I no longer have to go searching for my next prospect that I know can take me to the pay window.  I just have to look out my kitchen window to see them!

From Elvis' first foals to be started to working with the yearlings and weanlings we know that they have a striking resemblance to their sire.  With this, we will always put up with the extra work and hassle of a stallion because not only does Elvis deserve it, but because of him, we will always have horses that we "love to ride". 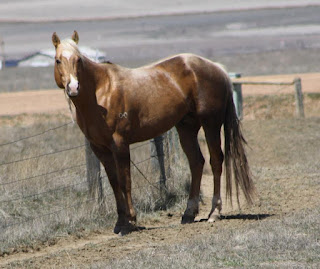