Humbleness Of A Champion

There are people out there that you'd never guess that they won some big event, were incredibly talented or had the rightfully earned bragging list a mile long. They walk humbly, ready to give a lending hand at any moment's notice. These people are quick to bring up your accomplishments and slow to tell their own. I've been around some that walk humbly, but there is one man that I've been blessed to know that really embodies the word humble.

Growing up in a non horse family, I had to rely on others to learn all I could. Many kids have their parents to teach them, be their coach, and provide them the horse power they need to succeed, mine took me to the best people they could find to nurture my love for horses and rodeo. It might have been a blessing in disguise that I had to rely on others because in doing so, I had the opportunity to learn from some of whom I consider to this day - the best. As I entered high school rodeos my freshman year, I had always wanted to breakaway rope. It was then that Lowell Faris took me under his wing. Lowell, who is a very accomplished calf roper and trainer has more titles to his name than some can count, but you'd never know it by talking to him.

Lowell invited me to his and his wife Jan's home and we spent countless evenings in his arena roping calves. He helped me not only learn how to rope but to work with the horses that I was riding. With his quiet demeanor, I always thought he was a master at teaching these horses to do their job but to love it as well. I loved getting to opportunity to watch him work with a young horse and seeing those young calf horses grow in confidence with each run. When I would be struggling with something, we would go to the loft of his barn and rope the bale. Over and over, Lowell would critique each swing, the throw and the catch. I was never a natural and many would have given up trying to teach me. However, Lowell would stay and work with me as long as I needed, many times until long after the sun had went down.
The horse I started roping on, although a nice horse, did some things that were making me develop some bad habits. One night in the practice pen, Lowell offered to let me rope off his trusty backup, Duster. For once I didn't have to worry about my horse doing his job and I could focus solely on my roping. Never asking for anything, Lowell just said take him home and ride him. It was a gesture that I will never forget and allowed me to gain so much confidence in my roping game. Later when I was college rodeoing for Montana State University I called Lowell after my first rodeo and told him about the trouble I had that weekend in the roping with my horse. His response was come and get his good calf horse Doc; who would have anyone drooling and jumping at the chance to ride. He never thought twice about sending a horse that he could have sold time and again to NFR calf ropers with some piddly college girl that just hoped she could make the short go at a college rodeo. He just wanted to help and knew Doc would be the answer to my trouble. I was just one of the many kids that he helped over the years.
Lowell always looked out for the kids that he helped. I don't know how many times he came to my rescue in changing a tire or fixing lights on my trailer or even making sure that I made it safely home. In high school I got the itch to rodeo at the amateur rodeos. My parents with 4 other kids and businesses of their own, weren't always able to take me or be gone for the weekend so once again, Lowell took me under his wing and let me travel with him, his daughter Ali and son-in-law Chad to the rodeos. The time spent traveling with Lowell and his family, I was able to see even more into what an amazing man he is. He was always there to pick you up after a bad run. Telling you to shake it off and giving you the encouragement for the next run. He'd make a run to lead the rodeo and turn around and be quick to aide anyone else that needed a helping hand as others congratulated him on a good run. He'd say a quick "Thank you." and continue helping whoever was in need. You never knew by his demeanor that he just won the rodeo. I always admired his humbleness. A true champion in every sense of the word, you'd never guess with his humble and gracious manner.
Lowell has been such a huge mentor in my life. He taught me many lessons inside the arena and out and became a second father to me. I will never forget my time spent at his place roping and his teachings beyond the arena. He took me in as one of his own and for that I'll always be thankful. He taught me a true champion is humble and ready to give the next person a leg up to become a champion themselves. It's one of the many lessons from Lowell that I will carry with me for the rest of my life. I hope that I am able to give someone else that leg up that he so graciously gave me! 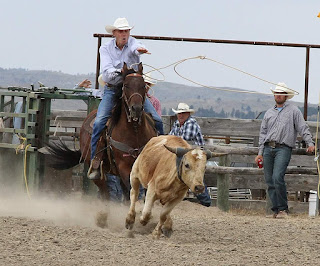 Posted by Andrea Huft at 2:33 PM No comments: