A few years ago I had the great fortune and pleasure to attend a horsemanship clinic with Doug Jordan.  I had a horse at the time that when I was running, I had a hard time picking up the shoulder and moving over.  There was always a hesitation, a resistance if you will.  I remember telling Doug my issue.  He watched me ride my horse who really was well broke and you could place him anywhere doing slow work.  It was the fast work that I would get in trouble with.  I was expecting some sort of high powered drill.  Something that involved a lot more pressure mentally and physically than what I received.  Instead, I received a post.  Yes a post....

Doug had me position my horse at an angle to this post (about a 45 degree angle) that when I put pressure on my leg that the horse could go forward (avoiding the pressure) or turning into the post (giving into the pressure).  Doug put me and my horse in position next to the post (and fence) and told me to put a little pressure (and by little, I mean slight, barely readable) as if you set a post right there, and just leave that pressure on until my horse responded.  You didn't increase the pressure, you just left it the same. Then he left me! Like, literally left me to make his rounds to the rest of the clinic participants.  I thought, well what in the world am I to do now?  There is no way that this horse knows I'm asking it to do something with this little of pressure.

So I kept the pressure the same as when he left and watched him as he made his round to the rest of the clinic. Probably 5 minutes later my horse finally moved.  He didn't move just to move, he moved away from that pressure and turned into the post, giving to pressure.  I let him basically do a walking roll back and walk out.  Bringing him back to our original position I thought he was bored and that's why he did what he did.  Heck, by that point I was bored myself! I was prepared to sit there again for awhile.  Much to my surprise as soon as I put that slight pressure on my leg, he turn and gave way to the pressure.  I'm talking as light of a pressure as a fly would put on him if it landed there.  So slight I didn't know if I was putting pressure there or not. Doug didn't care how long it took to get a results, that's why he left me and gave me but most importantly my horse time to get uncomfortable with that pressure and move away from it.  I needed time, patience, and a steady pressure.  As Doug said, I was like a post.

Sometimes we can get in a hurry.  We think we have patience but really we expect results right away when we ask a horse to do something.  We don't give the horse time to figure out the answer by itself. I've found that if we give the horse the option and opportunity to put the pieces of the puzzle together by itself, that that lessons sticks much better than if we force it.  We make the wrong thing hard and the right thing easy but not always do we give the horse the time to make that decision for itself.

My husband is an excellent horseman and his forte is starting colts.  The colts he starts have a confidence about them that is undeniable.  They are soft in the mouth and their sides and they have little if any resistance, working under willing submission. He can have those colts trotting backwards on a loose rein.  Something that I am NOT good at doing.  I have a tendency of getting my colts stuck.  When they get sticky in their feet, it's easy to start pulling on them, even ever so slightly.  As I'm riding a colt by Philip and struggling to get this colt to back the way I want, he reminds me of the lesson that Doug had showed me before.  Leaving my hands still and giving those colts time to figure it out, it took nothing before my colt who was sticky in her feet started driving from her hindend, picking up her feet and backing up on a loose rein.

September seems to be the month of weaning colts and of course halter breaking them.  Every year we bring the colts home from the ranch and go through the process of gentling them down, halter breaking , picking up their feet and getting them accustomed to life without their dams.  Some take it harder than others, but most are halter broke within the day.  One critical item I use in halter breaking training is a tie post.  A regular sturdy post buried into the ground with nothing else is invaluable to me.   Much like the lessons mentioned above, the post gives those colts the opportunity to sort things out themselves.  The post never takes slack away from the colt if it pulls back, it's pressure stays steady, the same.  Sometimes that post can be the best teacher in halter breaking a colt as it learns for itself that when it gives to pressure, it gets a reward, a release.

I think often to how much the lesson Doug and Philip gave me has helped in my riding and everyday working with a horse. When people have fairly soft hands but have a tendency to pull on one as we all can get, I think of being soft as a post.  There is a pressure there that doesn't change.  It doesn't pull harder, it doesn't snatch or take a horse by surprise.  It literally gives the horse two options - give to pressure or pull against pressure.  There is only one release and that's when they fully give themselves into the pressure. They can't lean and get the release. They are not pressured to give the release.  The post gives them the time to figure it out for themselves. They learn the right thing is to give to pressure, and they crave that release, that reward.  Sometimes to get the best response you don't need to pull harder or put more pressure on them; you just need to be as soft as a post. 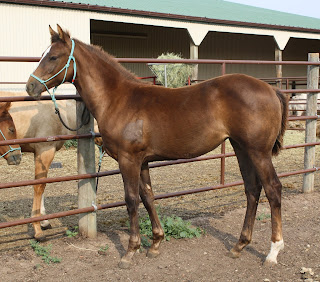 Posted by Andrea Huft at 9:45 AM No comments: