A year ago My husband and I found out that our lives were going to drastically change.  With three boys already, we were pretty content and happy with our family of five but God said we weren't done yet....and we found out we were pregnant.  When I say that we were content, I mean we had given away pretty much every last shred of anything baby we had.  We were done having kids...done!   But God's plans are greater than our own and we welcomed another baby boy into our family in October. Now there's no way I could imagine our life without those four boys that I'm proud and blessed to be their Mom.

However, I'm going to admit that baby #4 has came as a shock and certainly rocked our world as we were in the midst of buying a place, fixing it up and eventually moving to.  Our plates were beyond heaping full with all that we had going on in addition to our horses, cattle and of course our boys.   As a result, my horses have been set to the wayside as I try to care for and do the things that are set on a strict timeline.  Suddenly with a baby, our little trailer house was not going to fit our family and the house we had been working on got a huge promotion on the priority list. Horses I never planned on selling, were sold, and we just got by this last year, doing what we could. Survival mode.

When you have so many dreams and goals of your own, spending a year sitting out and being on the sidelines sure is hard.  It's even harder when you don't even get to watch the game due to your hectic schedule! The hardships that have came with the baby to be able to work on my horses and goals for some reason have been much harder with this time than the others.  Most of the time I feel like I'm drowning.

I'd be lying if I said that I've been upbeat and positive about my horses and our program.  I'm one of those "all in" kind of people and haven't felt like I've been able to devote enough time into the horses and with that I thought very hard about selling out. Quite frankly I was throwing my sucker in the dirt and maybe stomping on it a little too.

I recently started reading a book by John O'Leary called "On Fire". I haven't finished it yet; something about four little boys makes it hard to read much at one time.  However, early on in the book something grabbed me, a quote. "When you know your why, you can endure any how."  As I fight back to my journey to the saddle, I have been saying a lot of "How's"? My life feels consumed by "How's". "How am I going to ride with a brand new baby?" "How am I going to get my colts rode?"  "How am I going to foal my mares out at our new place?" In addition to all the how's of just every day living with four kids. "How, how, HOW?!?!?"  The list of "how" grows by the day that it becomes overwhelming - crippling almost.

It was about this time that I finally was able to bring our stallion, Frenchmans Elvis home.  It wasn't a plan to bring him here yet. But due to safety concerns where he was at, we brought him home early without a safe place to put him but in the corral.  After spending his whole life out in the pasture, spending his days in a corral left him bored and you could tell he wanted to stretch his legs.  Luckily for me, one day Philip got home early from feeding cows and kicked me out the door to go ride.  He expected me to go ride Honey but I wasn't eager to walk the quarter mile in deep snow to go catch her with Elvis in the corral within easy reach. After not being rode for over two years I wondered if I was crazy as I saddled him up to give him a little exercise.

You know the saying, "fits like a glove"?  That's how it felt that day as I stepped on him for the first time in years.  I rode him through the cows as they were happily munching on their hay and headed out to the back pasture. As we were riding the hilltops, deep with snow, that quote came to me and hit me hard.  "When you know your why, you can endure any how."   Right there was my "Why", Elvis. There is a connection to everything I do with a horse and Elvis.  From the breeding side of things to personal barrel racing goals; he's part of it in some way, shape, or form, through himself or his foals.

As much as the horses are a part of me, this season of life that I'm in with my kids is something that I don't want to miss out on. While the obstacles ahead of me or the "How's" may be great, the simple reminder of "Why" has helped change my attitude.  It might take me a little longer this time, but in the end it will be worth it. 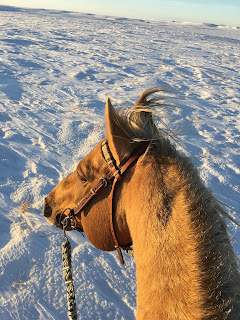 Posted by Andrea Huft at 2:47 PM No comments: