Seasoning Your Colt At Home

Ten years ago it was nothing for me to load up a trailer load of colts, head to the barrel race and camp out for the day or weekend.  Now, something about having four littles to take care of, it’s a different story and my time away from home on my colts just got a whole lot shorter and that much more valuable.

I’ve had to reevaluate how I train day to day on my colts in order that I can maximize the limited time that I have actually seasoning them. Here’s a few things that I do at home so that I don’t have to do them on the road.

Tie them up saddled.  It doesn’t matter if I’m going to ride them right away or 3 hours from then, my colts can stand saddled and tied.  They learn that they can be patient and respectable just like I expect when they are tied to a trailer at a barrel race.  Even if you can’t ride them that day, saddle them anyway.

Take them to water.   The old saying, “You can take a horse to water, but you can’t make them drink.” is no excuse, especially at home.  Let them stand tied for a few hours and let them get a little thirsty.  I’m not talking take the water away when it’s 110 degrees and you rode them for 2 hours nonstop.  I’m talking that they can stand an hour or two and then given a drink.   I have horses that now will drink anytime they are offered water, home or not. 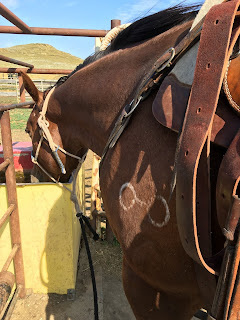 Ride them rain or shine.  I know that this is easier said than done, especially if you don’t have an indoor arena available during the bad weather.  However, it’s important that these colts know that even though it’s blowing, that they can still keep their cool and ride despite the weather.  If I don’t have someone to watch my kids while I ride, then they at least get saddled.

Put their nose on fear.   I’m a pretty non confrontational person so this is a hard one for me.  However, it’s sooo important.  If your colt even cocks an eye to look at something or if it’s full on blowout, work that colt to where you can put their nose on what scared them in the first place.  I’ve found by doing this that colts get more and more confident and less likely to spook when they confront their fears.

More chaos the better.  Walking through my yard with four boys feels like I’m riding into a jungle.  You never know when a monkey, ahem....kid, is going to spring out of no where whether on a bike, throwing a basketball, or swinging a rope.   This goes hand in hand with putting their nose on fear.   I encourage my boys to run and play, shoot the B.B. gun, ride bike, ride their ponies, light the firecrackers, and whatever else they just might be doing when my colts are tied up.  If they are doing something and I’m able, my colts aren’t too far from them.   Later then I’m riding them, they are not nearly as apt to be scared from that runaway stroller or screaming child that we are bound to see later in their careers.

Put them to work.  I don’t get to ride on the ranch nearly as much as I did ten years ago, but I try to apply the same principles now as I did then.  Get on and go to work.  I want my colts to be able to be put right to work and not have to go ride them down first.

Sit on them.   How many times do we get to a barrel race, hurry and warm up only to sit and wait.  It seems like by it’s your turn that you need to warm up all over again.   I like to stop every so often during my rides and let them sit.   Wether it’s watching my boys or just sitting there thinking, learning how to sit still and chill is often overlooked. I want them to be able to keep their cool to where I don’t have to warm them back up to get them ready mentally, only physically to loosen muscles back up.

Keep them stalled over night.  For some this is commonplace.  However, I rarely keep horses in the barn and I don’t think about it until I finally have to spend a weekend away from home and my horses are going have to be in stalls for the first time. It’s good to get them used to that environment so that life on the road isn’t such a shock.  The same goes for an electric fence.  Get them introduced to it and used to it.  You will be happy that you did at home and they didn’t have their first experience at a jackpot.

Getting colts seasoned is a process.  Some horses take more to season while others are born seasoned.   It’s one of my least favorite things to do but doing just some of these simple things has helped shorten the seasoning process for me.  I hope that these tips will help you as well. 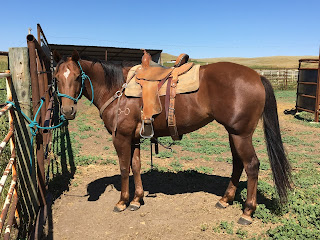 Posted by Andrea Huft at 1:46 PM No comments: