October 22nd has been a day to remember for me.  October 22, 2000 was the day that I had the opportunity to buy Smoky - the horse who helped me achieve more than I could have ever imagined.  The impact he made on my life is felt every day.  Through the years I remember how great Smoky was, especially on this day.  The partnership we had was special to say the least.  We bought him from Connie Soderholm, who had trained him and qualified him to the Rough Rider Finals. She was ready to see him go on with a high school girl and I'm so thankful that I was the one that had the opportunity to do that!  At the time, I couldn't imagine the pain that she must have felt seeing Smoky load up into our '85 Shelby 3 Horse trailer, (which by the way, I thought was the coolest trailer ever at the time).  Connie had spent years and countless hours in the saddle, training and hauling Smoky, preparing him for the rodeo road.  You don't spend that kind of time and dedication to an animal and not be attached in some shape or form.  Once again while writing this, I am so thankful that she let that wonderful horse come into my life. Now, 15 years later; I know the pain that Connie must have felt.

Vandy. What can I say about Vandy? If you've read my blog, chances are that you've read about Vandy somewhere. She was my dream horse even though she didn't start out quite like a dream.  Always talented, always an athlete, she's also always had a mind of her own.  She was a natural on barrels but had the "hang on woman" mentality instead of a "let's do this together" mindset.  Sure, she was quick and could turn a barrel faster than I'd ever felt on a finished horse let alone a 4 year old, she did not want any help or any type of suggestions from her rider.  We had to change that! It was one of the most trying times ever in my barrel racing career.  I almost gave up.  Philip encouraged me on.  I have never learned so much or learned so much outside of the box than I did at that time.  Slowly we started making headway.  It was quite the team effort.

As a five year old, Vandy surprised me as she climbed up the Ds.  In February for her first run she was the top of the 3D with mistakes galore.  She ran in the 2D at a huge barrel race by April and in June, she won her first 1D check, which also happened to be her first jackpot win.  I had never had a horse be that "on" and always show up to make a run like her.  By August, her very first rodeo, which also happened to be during the performance, she won.  She blew me away.

Through all of our successes, we've had our troubles too.  Sure we had growing pains, we still had to work on the "lets work together" partnership mindset but no matter what, Vandy went to work every time you saddled her up.  She was a joy to ride on the ranch. An absolute favorite of mine to sort cattle.  Her grittiness on barrels is nothing to what she is on a cow.  With her quick feet and her natural cow sense, she probably should have went to the cutting pen first.  I spent a lot of time and put a lot of miles in the saddle on her those first few years.

During our time together, I've had our three little boys as well as she had some time off to raise a colt of her own.  Life happens and not always do we get to do everything we want to do. There are only so many hours in the day! Finally this year, we got to spend the year together.  We finally got to hit the road and officially season Vandy to rodeos.  Needless to say, just like her first rodeo performance, she ran the same no matter what.  She always gave me her all and took a lot of the hassle and worry out of being on the rodeo road.  Didn't get into the arena before the rodeo? Are there banners and flags by second barrel? Is it a side gate? Is it muddy? Oh look the ground is bad!  Those worries as well as many others were never an issue with Vandy.  She made life fun. I knew when I cinched up and headed for the gate that I had just as good of a chance to win as anyone there that day.  Vandy always showed up for work. 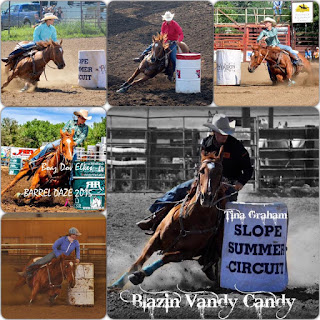 Life isn't always about rodeo and barrel racing though.  As I was out on the road more than I had been in the last ten years I missed out on a lot of things at home - my husband and my kids.  I had unbelievable support from my husband and both of our parents. I couldn't have done it without them all.  However, I couldn't handle being away from my kids as they grow.  Missing out on their stories and fun during the 4th of July was about more than I could take.

As the summer rolled on, not only was I missing out on my family but I was missing out on my colts.  My futurity colt had only a handful of runs on her and we were paid up into futurities.  I don't like showing up unprepared and I was really unprepared with my futurity colt this year.  I had to take some time off if I was going to get somewhat caught up with my colts.  By August I hit a few more rodeos close to home and as I came home from one of them I decided this was it.  At this time in my life, I can't rodeo pro, ride my colts, dedicate my time to our breeding program and have time with my family.  There were too many irons in the fire and I had to decide which one(s) I was going to pull out.

Rodeo obviously took me away from home more than most.  I knew that I couldn't be on the road like I was this summer.  But where did that leave Vandy?  She has so much talent and heart and if you've ever been around Vandy, you know she LOVES to run barrels.  I wanted to be selfish and just retire her to be a broodmare but I knew how much she craved the barrels when she was out on maternity leave with her first colt.  I decided that it wouldn't be right to just have her sit in the pasture and it wouldn't be fair to her to just hit a jackpot while I'm seasoning and preparing my colts.  She has too much to offer to go down that route.  I knew at this point in my life that I had taken her as far as I could go.  She deserved more, she deserved to shine.

There was a lot of prayers.  I had some good conversations with our Lord over this.  In my heart I knew it was right but my selfishness still had a hard time with the decision to sell her.  Vandy was my girl.  She was my dream horse.  She was everything I had ever imagined.  I knew though, I owed her this chance to showcase what she could do.  I prayed that God would provide the perfect fit for her.  And on October 20th, he did. 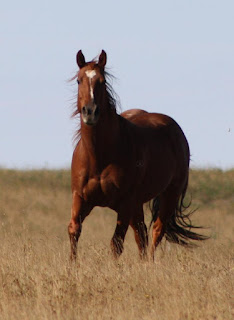 Tammy spent three days with me and Vandy.  Getting to know us and getting to see and feel Vandy inside and out.  It was a match from the get go.  As I told my husband, it was like I was riding her.  It was such a rewarding feeling to see Vandy, who I've poured so much of myself into go on and ride like she did for someone else.

October 22nd was the day that Tammy asked me if she could buy her.  Although I knew it was a possibility, I was not prepared for that moment.  It would have felt wrong to have said no.  She rode and treated her as if it were me there.  It was Vandys opportunity to shine.  There were tears when she loaded up into the trailer.  There were flashbacks to our times of success as well as our times of trials.  My selfish heart broke knowing that she wouldn't be waiting for me at the gate in the morning like she always did.  However, through it all. I thought of Connie.  A growing family of her own, she chose to let Smoky go to continue his barrel racing career and helping a little girl achieve her dreams, me.  I hope we did her proud and I hope she knows how thankful I am for him.  I also hope, that I too can see Vandy shine as Smoky did with his new rider.  I know Vandy can help Tammy achieve her dreams.  My heart will be full knowing that I didn't hold her back.

Some day I may be in a position to go down the rodeo road. Until then, I will get to be close to home, with my husband and our boys.  I will get to spend time with our colts from our own program and have the joy of helping them reach their potential.  As a friend told me; "You have stars all over in your pasture.  Just polish them until they shine just like Vandy. "