Throughout the years, in my slow work I had made a habit of making a small effort to praise after every barrel.  A simple pat on the neck and a "good job" were all I'd do.  I wanted my horses to know they had done well, beyond the release of getting to go on to the next barrel.  I'd done this so much that I didn't realize I was even doing it. It became second nature.

Several years ago, I was at a barrel clinic with a horse that I felt oozed with confidence. When sitting at the gate, he had this air about him, a feeling that was palpable through the saddle.  He felt unshakable and he knew his job.

As I was doing my slow work at the clinic, the clinician stopped me. She said that I should reward my horse with a praise like that after they did something more significant.  Not something as simple as turning a barrel at a slow trot or lope that at that point, this particular horse could do in his sleep. I took her advice and saved my praise for the really "significant" breakthroughs we had.

When I came home and started making more runs on this horse, I felt him second guess himself.  His booming confidence dwindled.  It took some time and trial and error before I realized what was lacking. Praise.  That little pat on the neck of reassurance meant more to that horse than I or the clinician could ever have known.

Just like a kind word, a praise, or acknowledgement is often overlooked, something so simple can mean so much to the person or animal on the receiving end. It can have an impact that can reach far below the surface. In this case, an outside look saw a touch of a neck, but the horse felt something so much more beyond that.

I thought of this story as I was cleaning and came across a pair of jeans. These jeans have a small hole in the leg. How that hole appeared, was a result of an accident when a horse stepped on me.  My husband was with me at the time.  At first glance, he thought a band aide or at most a little vet wrap would fix what was beneath the surface.  When beneath the surface (my leg) was revealed, he saw that the impact was much greater than what the surface (my jeans) had originally shown.

This visual is the same for horses and people.  However we aren't often able to go beneath the surface.  Don't underestimate the value of something small.  A good word, a pat on the shoulder, a smile, all can go a long ways and will spread well beyond, just like it did with the hole in my jeans. 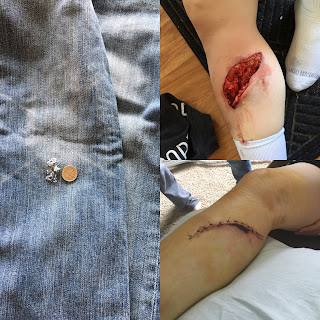